Yesterday, Tyler Dellow had an interesting post over at The Athletic (paywall) examining why not all ice-time against opponents is created equally. By drilling down on how the Leafs’ defensive units fared against various levels of competition last year, Tyler was able to dig into why Toronto’s bottom pair was able to do better against top 6 competition than their top pairing did.

The whole thing is a worthwhile read, but the one line that stood out to me was this:

The point is that [Roman Polak and Andreas Borgman] got time against the opposition’s top line in circumstances in which that line didn’t really pose an attacking threat.

The overall idea that Tyler presented is pretty intuitive but also incredibly important: if you come on the ice when your opponent is finishing their shift, they’re unlikely to be mounting much of an offensive push, and most of their effort will likely be focused on advancing the puck out of their zone and getting of the ice.

The plot below shows how shot rates change relative to the time remaining in a player’s shift (the right side of the chart is the end of a player’s shift). I’ve limited the analysis to shifts that ended with an on-the-fly change, since shot rates at the end of a shift that results in a stoppage are extremely high (these are mostly shots right before the puck is frozen) and face-off starts are obviously a whole different ballgame. 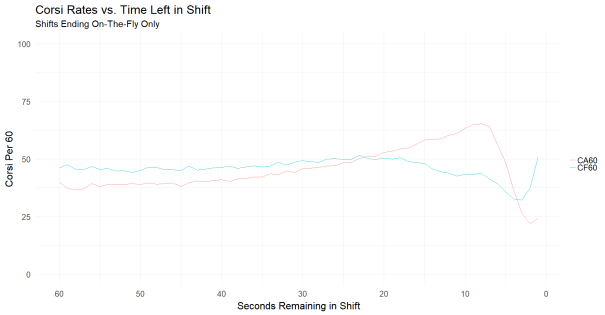 As you can see, the data seems to be fairly in line with what Tyler was arguing – shot rates against go up at the end of a player’s shift while shot rates for drop slightly. We see a slight rise in both rates for and against in the last 1-2 seconds, which are likely just shots that are occurring as a player is leaving the ice and are unlikely to be related to their individual efforts.

When we look at the data broken down by position, however, we see a more nuanced situation which gives us a better view of how different roles impact a player’s results. 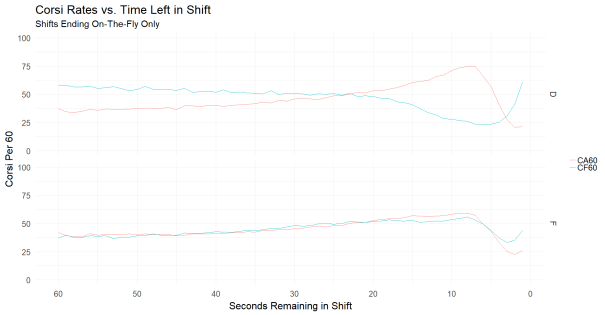 While the trend we saw above seems to hold for defencemen, the progression of a shift for forwards is much different. Defencemen tend to outshoot their opponents in the early part of their shift, but mostly get outshot from the last 20 seconds of their shift onward.

Forwards, on the other hand, have a fairly even shot attempt ratio through most of their shift, with the overall pace of play dropping off towards the end of their shift. The key thing to note here is that if you’re coming onto the ice for the last 10 or so seconds of an opposing forward’s shift, you’re probably not going to be seeing the best effort from them.

These trends even hold when we break things down by quality of player. In the chart below I binned (yes, I know) players by average TOI rank to create four lines for forwards and three pairs of defencemen (this is an imperfect method, but should give us a reasonable view of what’s going on).

The data shows pretty much what you’d expect – each line and pairing shows the same trend, with the major difference between the top and bottom 6 being that top 6 players tend to outshoot their opponents early on, while bottom 6 lines get outshot throughout their shifts. The key again though is that even first and second line players see drops in their output towards the end of their shifts.

All of these results have clear implications for many of the regression-based models that are being developed today. These models treat each interval (a consecutive period with the same 10 skaters on the ice) as a row in their input, and have dummy variables for each player on the ice and to account for the impact of how the interval started (e.g. defensive zone face-off or on-the-fly). The regression then attempts to find the coefficients for each player and starting state that best explain the observed results (generally Expected Goals or Corsi, for or against).

But what this analysis suggests is that we might need to know additional information about how long a player has been on the ice in order to adjust for a player’s “intent” over the interval. Players who have just started their shift likely intend to generate chances, while players who have been on the ice for more than 30 seconds may only intend to get the puck out of their zone and get off the ice. If I’m a player who consistently plays against top line players only at the end of their shift I may be getting credit for shutting down these players (who otherwise have good offensive results) when in reality their suppressed offensive output may simply be a structural product of how the flow of the game works.

The big question, of course, is whether the differences in which players face better or worse opposition at the end of their shift are meaningful (spoiler alert: I don’t know). Tyler’s data certainly suggests that they are, but there’s likely more digging to be done to determine the extent that this phenomenon impacts the metrics that we use to evaluate players. Nevertheless, these results clearly show that there’s more about the structure and flow of the game that we can mine from the existing data, and that quality of competition may be more complex than previous attempts to measure it have suggested.