Examining The Drivers of Score Effects I: Shooting and Save Percentage

Score effects – they’re real, and they’re spectacular. And while the idea and impact of score effects are generally understood by most in the hockey analytics community, they can often be a difficult subject to introduce to newcomers to the field. A solid knowledge of score effects is critical to understanding why teams that outshoot their opponents in a given game tend to lose more often than not, or why a player or team’s unadjusted statistics may be misleading you.

Furthermore, while many people have hypothesized about what causes score effects, there’s currently little documented analysis examining the actual drivers of score effects. So consider this article, and its coming sequel, as first steps at drilling deeper into the factors that lead us to observe score effects. Hopefully these pieces will serve as both a reference point to provide a basic understanding of score effects, and as evidence that helps justify any adjustments we do make when devising new statistics.

What are score effects?

Score effects generally refer to two changes that happen in a hockey game depending on the current score. When a team is up by 1 or 2, our expectation of how they’ll perform (and consequently what stats we’ll record) is different than when they’re down 1 or 2. These changes often have a non-trivial impact on the stats teams and players accumulate in any given game or season, and consequently can change our impression of them fairly significantly.

Corsi For Percentage by Score State

This is the factor that lead to the development of Score Adjusted Corsi and Fenwick, first popularized by Eric Tulsky, and more recently updated by Micah Blake McCurdy. Score Adjusted Metrics have been shown to better predict future results than non-Score Adjusted Metrics, highlighting the impact that score effects can have on our understanding of a team’s underlying talent.

The second change, which is referenced far less often, is that teams that are leading tend to score on a higher proportion of their shots (i.e., they post a higher shooting percentage) than teams that are trailing. The obvious corollary to this is that teams that are leading also see their save percentage rise, giving them a percentage advantage on both offense and defense. And while we’ve known for a while that these changes happen, there’s been less research on why the percentages change when the score changes, and if there’s any information in these changes that we can use to better understand the performance of a team. It’s the drivers of these percentage changes that we’ll look into in this article, to see if we can figure out what’s really behind the shifts we see.

Wait, let’s back up a step first – do teams in the lead really score on more of their shots and allow fewer of their opponents’ shots in?

Yes, as unbelievable as it may sound, teams become better shooters and goaltenders when they’re in the lead compared to when they’re trailing. 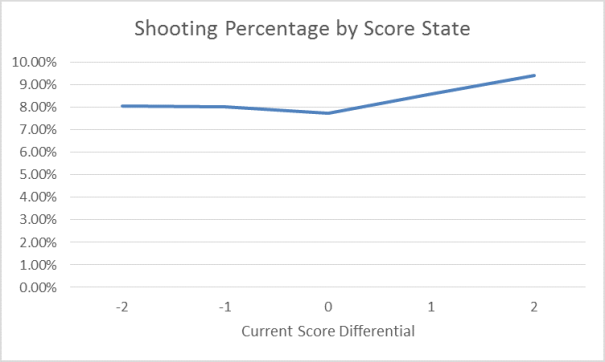 Save Percentage by Score State

There are 2 things to note here: first, when games are tied teams play better defensively, and fewer shots go in than when one team is leading. This is true for both offense and defense, and doesn’t necessarily have profound implications for our analyses, but is nonetheless interesting to note.

So why do teams shoot better when they’re leading? Is it because the teams with better shooters are generally leading more often?

Actually, no. To test this idea we can bucket each team by their shooting percentage in tied games and see if the general trend holds. The tied shooting percentage should give us a reasonable estimation of a team’s true shooting talent, so if we still see score effects after we’ve bucketed these teams it’s reasonable to conclude that it’s not an issue of better shooting teams playing with a lead more frequently.

Ok, what about on defense? Maybe the teams that have better overall goaltending are in the lead more often?

Once again, the answer is no. If we do the same analysis we just did, but this time we group by save percentage, we still see score effects in each group. Even for the teams whose goalies posted a sub-0.910 save percentage when tied, they still received better goaltending when in the lead than when behind. Once again, we see that the effect persists even after we take into account any differences in underlying ability.

Save Percentage by Score State and Tied Sv%

Is it where teams are shooting from? Are good teams just getting more shots from high danger areas?

This seems to be partially the case – when teams are down or tied, the distribution of their shots in generally the same, with the % of shots taken from the high danger zone unchanged between the -2, -1 and tied score states. There is some shift to taking more low danger shots and fewer medium danger shots when losing, but it’s not a significant move.

We see the real differences when teams are ahead, as those clubs take a larger portion of their shots from the higher danger zone (29.6% when up 2 vs. 27.6% when tied) and a lower amount from the low danger zone (41.8% when up 2 vs 44.9% when tied). Given that high danger shots are (obviously) more dangerous, can we conclude that this shift alone is enough to explain the changes in shooting and save percentage that we’ve noted above?

And as it turns out, teams do actually shoot better in each of the three danger zones when they’re leading (and similarly, they shoot worse when they’re behind regardless of shot location). So while the shift towards more high danger shots when leading might explain some of the increase in shooting percentage, it’s clear that there’s more to the story than just that. It may be that teams that are leading are taking more of their high percentage shots on odd man rushes, or that defenders are more frequently out of position as they pursue more aggressively in an attempt to regain possession – in any case, teams are able to convert more frequently no matter where they are on the ice if they’re ahead.

This is critical to know as we move towards the development of expected goal models, as it indicates that the score still has a major impact on the likelihood that a shot goes in. Knowing the shot location is clearly important, but adding in the score state gives us more information that can further refine our assessments, and help us form a better understanding of a team or player’s talents.

That’s a lot to take in. Can you summarize it all for me?

Sure, basically what we’ve found is:

Wait, what about the whole Corsi Percentage thing?

Haven’t you had enough yet? Not to worry, we’ll dig deeper into the changes in shot attempts in Part 2, which (hopefully) will be up soon.

6 comments on “Examining The Drivers of Score Effects I: Shooting and Save Percentage”